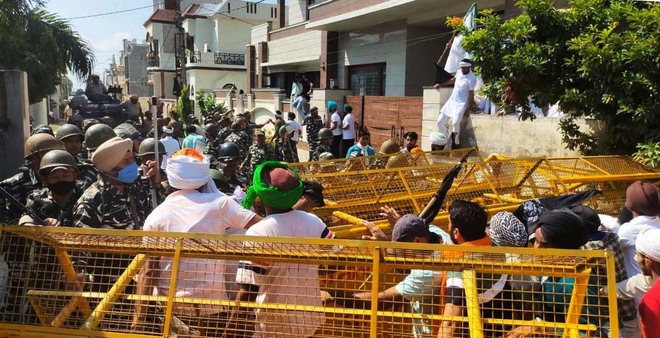 The scenario remained tense for a few hours outdoors a wedding palace at Indri the place BJP leaders had been conducting a gathering as farmers reached outdoors the venue after crossing barricades.

Everybody has the fitting to boost their points, however underneath the ambit of the Structure. No one will likely be allowed to take the regulation into his fingers. Ganga Ram Punia, Karnal SP

Within the presence of heavy police pressure and two firms of safety forces, BJP leaders had been taken out from the venue in police automobiles to keep away from any confrontation.

The farmers had given a name on Wednesday to protest towards the programme, following which they reached Indri in giant numbers.

On Wednesday, the BJP needed to cancel the assembly after protest by farmers.

Indri MLA Ram Kumar Kashyap, district president Yogendra Rana and former minister Karandev Kamboj had been among the many leaders current on the assembly. “It was a gathering of booth-level staff of Indri block. The farmers ought to protest in a democratic means and it’s the responsibility of the police to make sure regulation and order,” mentioned MLA Kashyap.

Farmers led by their leaders Rampal Chahal and Jagdeep Singh Aulakh took out a march, however had been stopped by the police round 200m from the venue.

DSP Mukesh Kumar tried to pacify them and mentioned that they’d be given a delegated place to protest, however the farmers refused to go to the positioning given by the police. Then, they crossed barricades and reached outdoors the venue.

SP Ganga Ram Punia reached there and talked to farmer leaders to pacify them. Farmers assured the SP of a peaceable protest.

Jagdeep Singh Aulakh, state core committee member, BKU (Charuni), mentioned that the BJP was organising programmes to impress farmers who had already given a name to oppose the go to of BJP-JJP leaders. “We’ll proceed our protest towards BJP-JJP leaders in coming days additionally,” he added.

No Magnetic Superpowers or DNA Alteration: Don’t Pay Heed to These Popular Myths about COVID-19 Vaccine