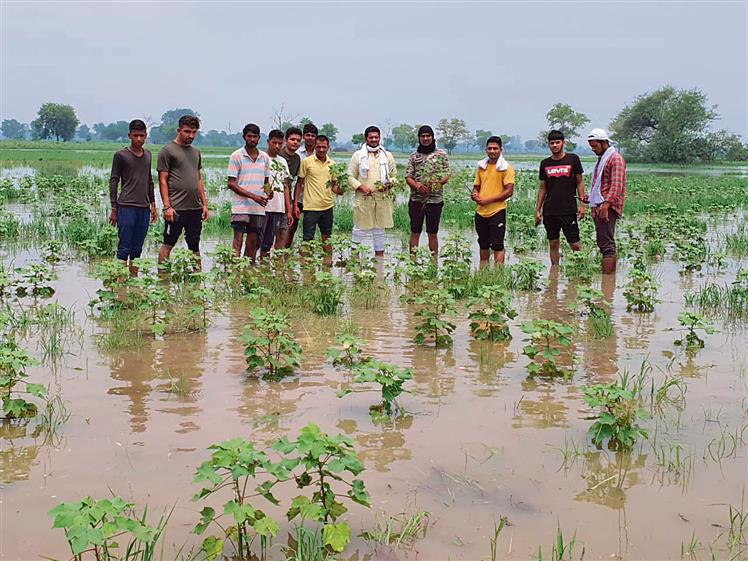 Heavy rainfall has left giant tracks in 80-100 villages of Hisar, Fatehabad, Bhiwani, Jind and Charkhi Dadri districts inundated. Official sources say cotton crop grown over 6,000 acres in Hisar district could also be broken. Fatehabad’s Tohana and Ratia areas too have been affected. The cotton crop is the worst hit as paddy and bajra can face up to water for weeks.

Irrigation officers mentioned that they had began draining out water from the fields. Dharampal, the husband of sarpanch Sushma Devi of Sulkhani village, mentioned nearly the whole crop within the village had been washed away.

“The panchayat is making preparations for potable water because the water provide has been disrupted,” he mentioned.

“Water has been standing within the fields for the previous 15 days. Officers are laying pipes and erecting bandhs,” mentioned a farmer, who has misplaced his cotton crop grown on 4 acres.

Fatehabad villages adjoining the Ghaggar in Tohana and Ratia are submerged in water. The farmers have put in pumps to empty out the water from their fields. “The paddy will likely be not have the ability to face up to one other spell of rain,” mentioned a frightened Gurjeet Singh. Agriculture officers mentioned cotton fields throughout 6,000 acres in Hisar and three,600 acres in Fatehabad had been inundated. “The crop may face 25- 70 per cent injury,” mentioned an official.

Minister of State for Labour and Employment Anoop Dhanak mentioned he had directed the officers to make sure sufficient compensation to the farmers underneath the Pradhan Mantri Fasal Bima Yojna. “Measures are being taken to cease the water from coming into residential areas,” he mentioned.

Takht for probe into ‘false’ cases

Shaktikanta Das stated the business will play a pivotal function in what may very well be often called "silent revolution" ...
Read more